Friends: I’m SO beyond thrilled to share the news with you today that Project Sleep proudly partnered with IFC Films and Ode to Joy Director, Jason Winer, to create a PSA to raise awareness about narcolepsy with cataplexy.

I am so grateful to Jason and IFC for their enthusiasm and partnership. Creating this video was a team effort, with significant contributions by many thoughtful people. Most notably, a huge shout out to Hannah Powell for making this project a reality and working with myself and Project Sleep every step of the way!

How this came to be

Over the past year, I researched how other disease communities have worked with and responded to the film industry in similar situations. I interviewed health communications experts and people in “the industry.” I learned A LOT. (Honestly, it would be another post entirely to explain how eye-opening this process was, but I’ll link to my fav articles at the bottom of this post.)

Since Ode to Joy was in post-production as of late 2018, influencing the content of the actual film itself was unlikely. Experts advised me to focus “my asks” on the marketing and distribution phase.

One of my key “asks” was to collaborate on a short PSA to raise awareness about narcolepsy with cataplexy surrounding the film’s release. Examples I’d seen included Netflix’s To The Bone Nine Truths PSA and The Emoji Movie‘s Stand Up to Bullying campaign.

Once in communication with Ode to Joy’s team, I presented “my asks” and director, Jason Winer, loved the PSA idea and quickly committed to working together to make this happen. This was a surreal moment! I’d spent months researching and formulating my asks, and now it was “go time!” 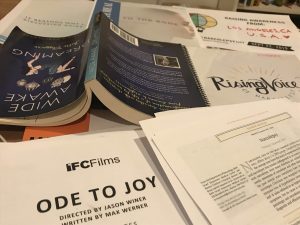 If you ask for what you want, you better be ready in case you get it!

I had ideas for the PSA and was happy to draft the script, but it was certainly a major undertaking! Jason and I decided to keep this to under one minute. My first draft was around 300 words and the final is about 140 words. I agonized over the pros and cons of each word choice with the help of a few close colleagues and friends.

About a week before filming, Jason and I agreed that I would join him as “talent” in the PSA. This wasn’t my original plan, but ultimately it made sense, and I liked the idea of a real person with narcolepsy with cataplexy being in the video.

On the morning of the filming, I felt shaky and nervous as I reviewed the script over coffee. Luckily, when I sign myself up for big things like this or marathons, I don’t feel nervous. The nerves come later, when there’s no turning back, like on this day, the only direction was forward.

Joining Jason on his current production set, the PSA filming was a whirlwind. We sat down in real director chairs, practiced twice, rolled the cameras, took two takes and called it a wrap. After this, I drove home and took a nap. (And I was dorky super-excited to keep our cue cards!) 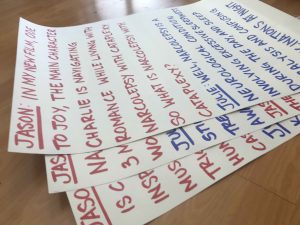 Please help us spread the word

Sharing this narcolepsy PSA is such a meaningful moment for me. This little dream became a reality, and the final video far exceeded my expectation!

Was the effort worth it? Depends on how many people share it to raise awareness! See, it’s not every day that famous actors star in films about narcolepsy with cataplexy. Culturally-relevant opportunities like this are few and far between, so please take this moment to share this video with friends, family and your social networks. You may be surprised by the conversations it sparks!

For more on Ode to Joy:

Thank you for your incredible support, together we are reducing delays to proper narcolepsy diagnosis.

A few articles from my research phase that really stuck with me: